As KAIRA makes use of LOFAR hardware, it has receiver unit (RCU) modes that match those of the LOFAR system. These modes go from 0 to 7.

These are described on the RCU modes page at ASTRON, however these days the underlying firmware mode is mostly hidden making things are little less transparent from an engineering perspective.

At KAIRA, the RCU mode typically used is RCU mode 3 (10-90 MHz) which is used for the ongoing background task (riometry, solar monitoring, interferometry, etc.). The other is RCU mode 7 (210-250 MHz), which covers the frequency of the EISCAT VHF transmitter (222-224 MHz) and is thus used when KAIRA is used as a bi-static receiver for EISCAT experiments.

However, last Friday, those keeping an eye on the KAIRA monitor web pages may have been puzzled by RCU mode 4. 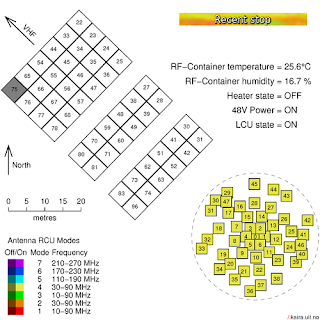 RCU mode 4 (30-90 MHz) is very similar to mode 3... however, it has a reduced bandwidth. The high-pass filter used is a 30 MHz one, rather than 10 MHz. The reason for including this mode was that when LOFAR was designed, it was not clear if the LOFAR system would be able to cope with the radio-frequency interference in the 10-30 MHz band. As it turns out, KAIRA is not so badly affected and we continue to use mode 3 for all our experiments.

However, on Friday we were doing a VLBI (Very Long Baseline Interferometry) experiment. This meant that KAIRA is working simultaneously with other LOFAR stations as part of a joint experiment. The observing parameters are determined by the network, not the individual station and, in this case, RCU mode 4 was used. Thus KAIRA matches it.