Near the KAIRA radio telescope site, there is the wreck of a crashed German bomber from the Second World War. It lies on the north western slopes of the Saana mountain, east of the Customs Border Station, near the old military road which winds its way between Finland and Norway. 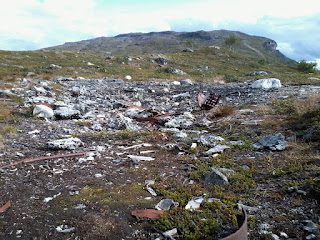 Recently, the Finnish State Forest Administration (Metsähallitus) did some work on the Saana/Kilpisjärvi area, including placing new paths and signs. One of the signs they put up was at the bomber crash site. 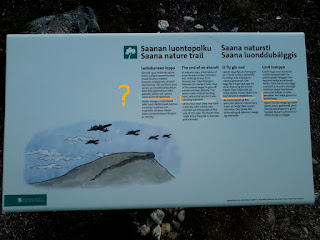 
Recently, I was walking to KAIRA and took route along the old military road past the crash site. Reading the sign, and looking at the remains of the wreckage, things didn't match up. There was no depression in the land (indicative of a crater) and the wreckage was scattered over an area perhaps 10-15 metres across, which is not very much. That implies that there were no bombs, which would have blasted fragments of the aircraft over a much larger area.

And then I saw this. 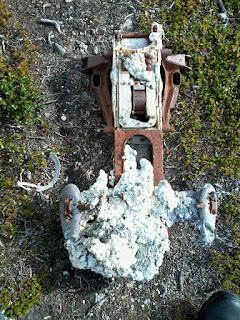 This is the mounting bracket for bombs. It is typically located on these aircraft on the inner part of the wing between the fuselage and the engine nacelles. At a guess, I would say it was either for SC250 or SC500 type bombs. 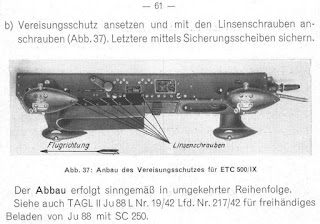 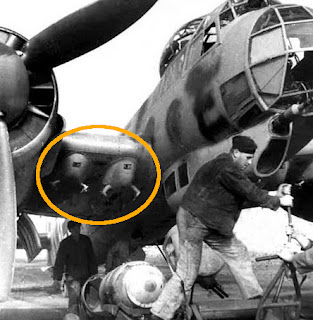 The bracket I saw was right in the middle of the wreckage. Additionally, it was encrusted in fused aluminium, suggesting the remnants of an intense fire, not an explosion. Certainly in the inner parts of the wings, there are large fuel tanks, so if the aircraft caught on fire (as suggested by the charred soil) then this is consistent.

What is not consistent is the idea that the bombs exploded.

If a 250 kg bomb (let alone a 500 kg bomb) exploded, there would not be an intact bomb-mounting bracket. And, even if that particular one was not loaded, if a bomb went off on the pylon next to it, it would not remain at the centre of the crash site, but would have been blasted quite some distance away. The aluminium aircraft skin would also be dispersed, making are quantities of molten metal impossible. Therefore, I will assert that the aircraft was not carrying bombs at the time.

It was certainly armed, though. Throughout the wreckage, there are various bullets. Some (like the one in the next photograph) have already exploded (these are typical 7.92mm air-to-air bullets, which explode on impact). 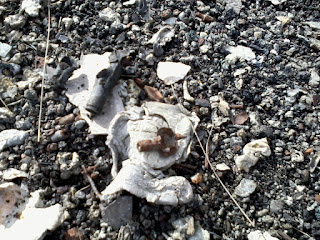 But these are simply air-defence machine gun bullets. Even on a transfer flight, such WWII aircraft were typically armed.


Doing some research in various books and online, it seems the aircraft was a Junkers Ju 88 A-4 (Werknummer WNr.1717), part of Stab./II. Gruppe, Kampfgeschwader 30 (Adlergeschwader). The fuselage number was 4D+?C (I am not sure what the "?" would have been though... a letter of some sort... if you know, please leave a comment!).

According to two sources, there were five men on board (Oblt. Oskar Dittmar, Obgfr. Karl Eichelmüller, Obgfr. Georg Gruber, Obgfr. Arthur Weber and mechanic Uffz. Max Krause). This is very odd. The Ju 88 has a crew of four; and conditions are already cramped.

One of the sources also suggests that the aircraft was en route from Banak to Kemi to be repaired. This is also strange, as Kilpisjärvi is significantly out of the way on a route from Banak to Kemi. On the other hand, if it was a service flight, then the idea of cramming in one extra person - namely the mechanic - might be feasible. (Again, if you have any ideas, do leave a comment!)

The Metsähallitus sign at the site said there were four, two killed on impact, one perishing shortly after and the fourth surviving. The old sign that was there before circa-2014 reported a similar story.

Certainly from what I can find, the story of the crashed Ju 88 bomber near the KAIRA site at Kilpisjärvi remains somewhat mysterious.

Exactly 75 years ago to this day.