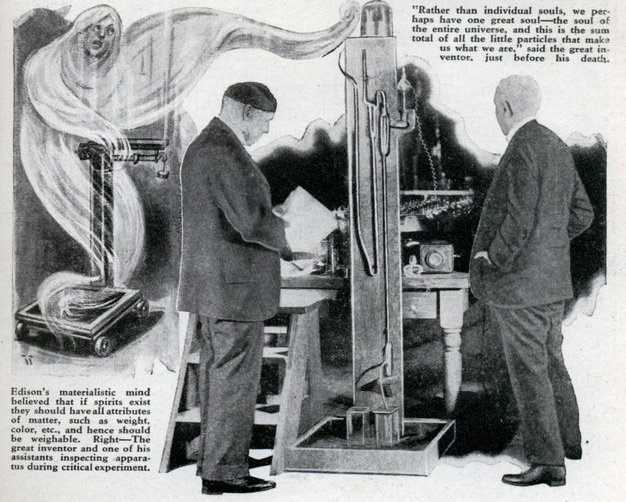 It's difficult, in our world full of Skype and Snapchat and radio science, to imagine a time when the act of producing a wireless signal -- either a sound controlled at a distance or a voice disembodied from its owner -- was considered deeply unsettling.

For context, when Marconi first wrote to the Ministry of Posts and Telegraphs in the 1890s to ask for funding to develop his wireless telegraph (or radio), the letter was dismissed with a comment that the idea was only worthy of an inmate at the local insane asylum.  At a similar time, Thomas Edison's phonograph had its first public demonstration at the Academy of Sciences in Paris, where people heard ghostly voices, without faces, emerging from the engravings on cylinders inside a machine.  One acclaimed academic grabbed the demonstrator by the lapel, claiming: It was all a trick! An acoustic illusion!

"The phonograph," writes Edison, "will turn that ancient dream of immortality into reality."

This era of invention also saw the rise of a new movement: Spiritualism.  Massive amounts of people became fascinated with the idea of communication with the "Realms Beyond", including many scientists.  Psychics, mediums, telepaths, and magicians were profiting immensely on these beliefs.  William Crookes, inventor of the vacuum and cathode tube, attempted to use his new devices to create a machine that would project images of ghosts onto a screen, and made several attempts to photograph ghosts.*

Meanwhile, Edison worked with morbid fascination on the topic of the threshold between life and death.** 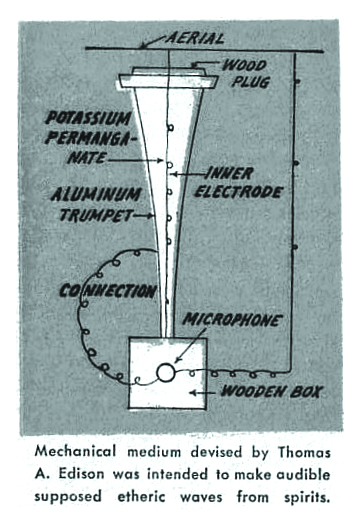 In 1920, Edison announced in Scientific American his plans to work on a machine that would "provide the spiritualists with a device that would give them the opportunity to work strictly within the boundaries of science."  He believed that there were "residues of memories, little voices" floating around in the air, that his device could capture and make audible.

"Like a microphone amplifies several times the volume and range of the human voice, my valve greatly amplifies any force of energy through with the spirit could show itself... By coincidence one of my assistants in this journey has just passed away.  Since he exactly knew what I was after, I would guess he will be the first to use my device, provided of course he is able to do so!"


It's difficult to know for certain Edison's level of sincerity.  Was it a genuine pursuit of explanation for the paranormal?  Or an attempt at creating an elaborate image?  Or, that common hubris: the disregard of truth in pursuit of what he merely wanted to be true?

* It is amusing to me that Crookes's cathode tubes were later used to project images of ghosts of their own -- in the form of television.

** Le Royaume de l'Au-delà, or "The Realms Beyond"; a chapter title in Edison's autobiographical work.