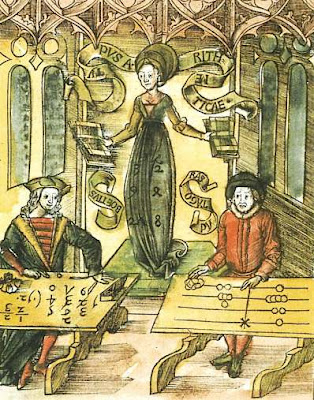 Imagine that you're a 15th century merchant, and you've raised your kids with aspirations of following your career in commerce.  You want to make sure that they know enough math, and your merchant buddies recommend a good German university where your children will be taught addition and subtraction.

"But," you ask, "what about multiplication and division?"

Your merchant friends all guffaw heartily, slapping their thighs at your audacity, and tell you that you'll have to send your children to study in Italy.  In a wave of radical Medieval counter-culturalism, Italy was the only country in Europe at the time beginning to establish "reckoning schools," places that taught such advanced arithmetical operations with the aid of a newfangled Indo-Arabic numeral system.

Throughout the 13th and 14th centuries, the use of these "infidel" symbols was prohibited (as written in a Florentine edict in the 1200s).  In 1348, the ecclesiastical authorities of the University of Padua forbade the use of what they called "ciphers" in books and price lists, specifying that they must be written in "plain letters" -- meaning Roman numerals.*

What we now call Arabic numerals were contraband, with zero considered particularly profane: a symbol for that Hindu concept of Nothingness.

Many Medieval merchants would keep contraband books of Arabic numerals, teaching the knowledge in secret, and signifying their confidential abilities with the mark of a simple "0", that unholiest of symbols.  It was the slow influx of this illicit knowledge that eventually led to a better arithmetical system as we know it today. 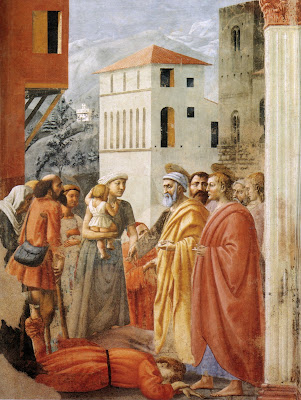 A painting by Masaccio, depicting an average 15th-century Physics PhD student at a social gathering.


But now let us imagine that you're an out-of-work mathematician living during this period.  How do you support yourself with few skills aside from your knowledge of arithmetic?  Why, you could travel from town to town, put out a hat, and do math tricks on the street for money.  Multiplying 27x14 in your head was considered just as entertaining as sword swallowing or juggling, and of course, fewer people could do it.**

(This post taken from the wonderful books, Lost Discoveries by Dick Teresi, and Ancient Inventions by Peter James and Nick Thorpe.)

~~~~~~~~~~~~~~~~
* a numbering system which, for anyone who has ever taken the time necessary to puzzle over just what the heck "CXLIX" is, makes even simple math an absolute nightmare.  This page gives you an idea of just how increasingly nightmarish Roman numerals could get.

** It never ceases to amaze me just how bored people must have been before TV and cat memes.
Labels: History Math