There has been a jänis attack at KAIRA. KAIRA is the Kilspisjärvi Atmospheric Imaging Receiver Array, which we support from here at Tromsø. A jänis is the Finnish name for what would be called a "Finnish Mountain Hare" in English. These creatures live in Lapland and a quite cute.


But don't be fooled

They are trained antenna killers!

For some reason, like like to gnaw on cables. And the elastic guy lines of the KAIRA Low-Band Antenna (LBA) array aerials are a particular favourite. On the old KAIRA construction web log, I had often reported KAIRA jänis attacks. Things have been quiet lately. 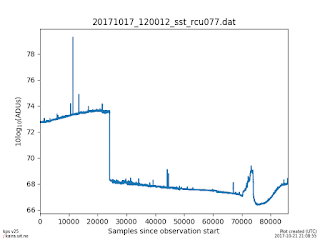 Some time later, there was a loss on RCU #076, which is the X-polarisation of the same antenna. This happened somewhat gradually over the course of approximately 1 hour, starting roughly at 07:50 UTC the next morning. 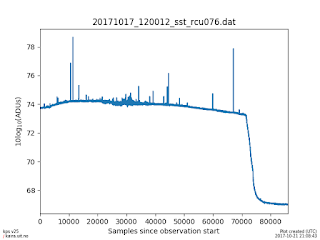 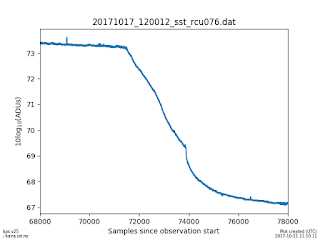 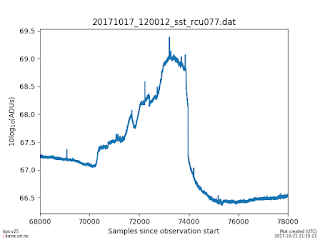 Zooming in on the time range, it seems that the initial fall of the Y-polarisation happened quickly, within the space of a couple of seconds. Here is the sequence of the spectra as the fall occurred. 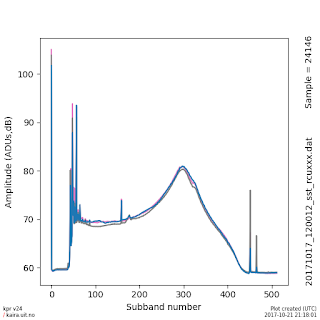 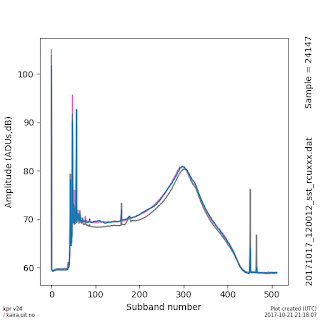 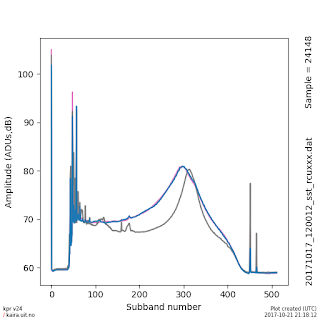 It is difficult to say exactly what happened, but my hypothesis is that the jänis chewed the elastic through at 18:42:40 UTC on 17-Oct-2017, causing the Y-polarisation to "short-out". The post remained upright and the X-polarisation continued operating. Then the next morning, the antenna slowly listed over and fell, possibly under the weight of the snow. Further snow has then covered it, rendering the antenna completely inoperative.

Well, this will need to be fixed.

The location is as follows (click to enlarge the plot, but the recent loss is the grey square near the bottom of the LBA array - otherwise marked in green on the status map, as we are currently observing in RCU mode 3). 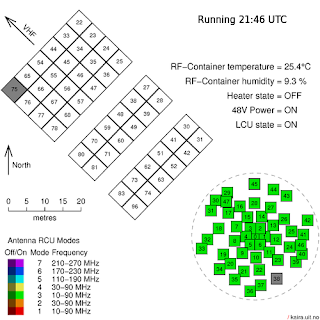