If you have an LF / MF (low-/medium-frequency) receiver and tune in the range between roughly 280 and 530 kHz, you may come across some slow, repeating morse-vail coded messages. We found one of these during the summer, when we were experimenting with our receiver system. 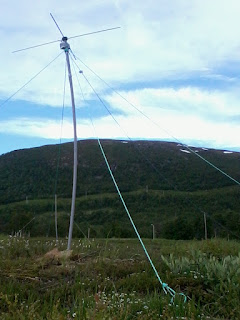 In our particular experiment, we discovered one of these slow-repeating patterns at 283 kHz. 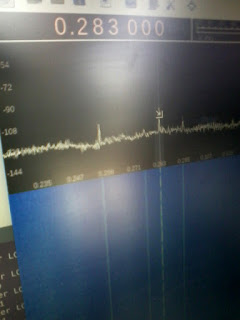 The pattern repeats over and over. But what is it?

Actually these are Non-Directional Beacons (NDBs), which are used by aircraft to navigate. They have set frequencies and broadcast their pattern and a directional antenna can determine the bearing of one, and hence assist the aircraft finding its way. They are not particularly strong transmitters, so they have relatively short range (typically 20-100 km, depending on conditions and the sensitivity of the aeroplane's receiver).

There are two NDBs located near Tromsø airport.  The one we found was Kobbe (283 kHz, KBV). The other is Kvalsund (362 kHz, KV). They show up on the airport charts, especially those for light aircraft and VFR (visual flight rule) flying. We found our by checking the Visual Approach Chart for ENTC (Tromsø/Langnes) 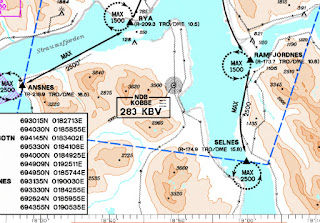 In the old days, these aviation beacons were relied on for most flights. Today, however, they have been nearly entirely supplanted by GPS satellite navigation and some authorities are switching off the old beacons.

Some argue that the NDBs must be maintained... security against a cataclysmic solar storm that could temporarily (or permanently!) disables the constellation of GPS satellites.

But certainly for now, many NDBs are still operating and provide interesting listening targets for those with LF/MF-receiving equipment.