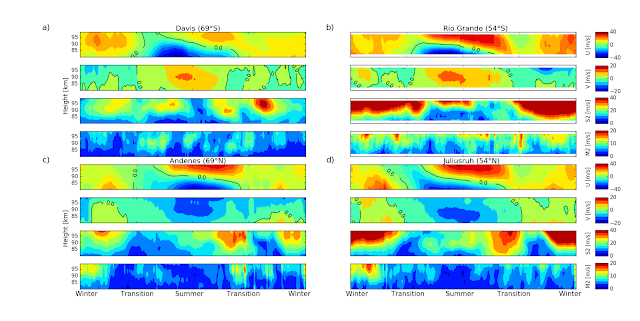 NEW ARTICLE ON THE CLIMATOLOGY OF SEMIDIURNAL LUNAR AND SOLAR TIDES


In this recently published paper (here) we describe the main characteristics of the semidiurnal lunar and solar tides at middle and high latitudes of both hemispheres during a time period of 5 years (2009-2013). The tidal information is derived from wind measurements provided by meteor radars at Davis (Antarctica), Rio Grande (southern Argentina), Juliusruh (northern Germany) and Andenes (northern Norway). The semidiurnal solar tides observed in the Southern Hemisphere (SH) show clear differences when compared to the Northern Hemisphere (NH) and between middle and high latitude locations at the same hemisphere. These differences are even larger for the semidiurnal lunar tide, which shows stronger amplitudes from October to March, and March to October, over Davis and Rio Grande, respectively. Our results also indicate that the lunar tides at SH middle latitudes are more prone to react to the NH stratospheric polar vortex influences, particularly during the 2013 sudden stratospheric warming event.
Labels: Moon