Many of you will be aware of the LOFAR project (KAIRA uses the same design, although it is not part of the LOFAR network itself). LOFAR stations are being built across Europe and the latest in the series in the station at Birr, Ireland. I am particularly fond of this project. As reported on the KAIRA web log, I was involved in the early stages and have assisted the team whenever needed. They are a determined group of really hard-working people and they deserve every success!

Last week, the commissioning team from ASTRON started work on on the final stages of the I-LOFAR site and within a few hours confirmed that all of the LBA and HBA antennas were working as expected. The I-LOFAR team posted this photograph at the site. 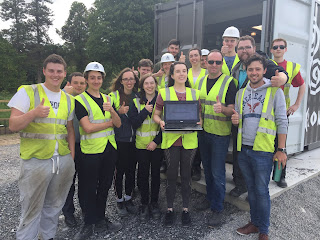 Congratulations I-LOFAR on all your hard work, and best wishes for successful science in the future.
Labels: I-LOFAR LOFAR