RCU mode 7 also means using the High-Band Antenna (HBA) array... that's the black tiles in the northwest part of the site. The only problem is that there is one missing!

During the Blizzard of March of 2014, there were a number of Low-Band Antenna (LBA) aerials and one HBA tile that were destroyed. The LBA aerials were repaired, but the HBA tile was not. Since then, RCU modes 5, 6 and 7 have always been without HBA tile #75.

But there is a bit of a trick we can do. Back in September 2012, I devised a mode of operating with KAIRA (or any LOFAR station for that matter) which allows both the LBA array and HBA array to be used simultaneously. This is the so-called 357-mode. So, rather than waste a channel during the VHF observing, we can assign an LBA aerial to it instead. Thus, LBA #40 is used in place of the missing HBA tile #75.

Because the LBA needs mode 3 (or 4), it means a dual mode experiment... mode 37. And here is the status map from the experiment. 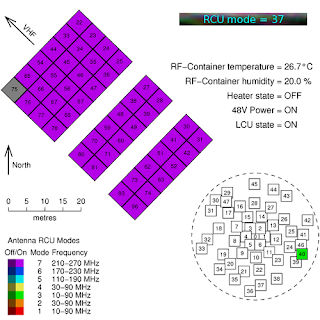 By using the lone LBA aerial, we don't waste the signal processing channel, and we get a single LBA aerial in operation. We can use this for monitoring of the experiment, and we can also use it to monitor solar radio emission or for single-widebeam riometry.