The Wizard and the Magician 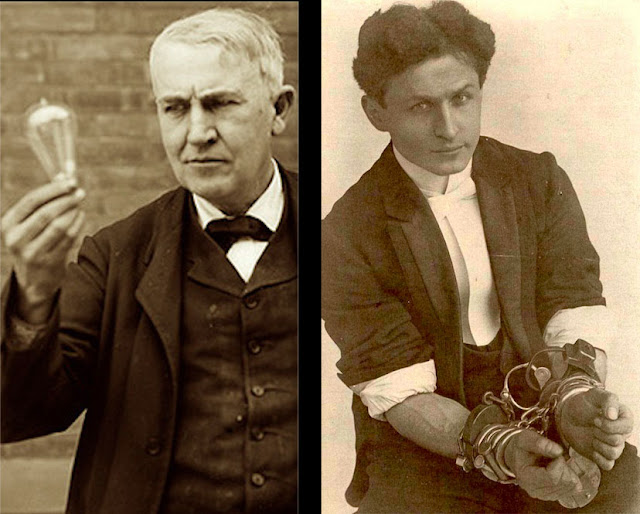 We all know, at least at a surface level, the names Thomas Edison and Harry Houdini.  One, a champion of the scientific method, and the other, a dazzling showman.

But wait -- which one, exactly, is which?

I'll begin with a short anecdote.

In a letter,* Harry Houdini wrote about paying a visit to the acclaimed psychic Bert Reese.  Reese would have his clients write their thoughts onto pieces of paper, fold them into presumably illegible "pellets", which he would then telepathically read.  Houdini wrote a detailed explanation of Reese's method, concluding that this was clearly not telepathy, but the type of stage magic trick that he, Houdini, knew well how to execute.  The letter's response came, indignant, saying Reese must be credible since even the great scientist Edison believed in his abilities.  Houdini replied,


Having delivered one of the sickest historical burns of all time, Houdini dropped his proverbial mic and went forward with renewed purpose.  He was on a mission to defraud psychics and mediums.

Thomas Edison, who never physically interacted with Houdini, was determined to scientifically support his belief in the paranormal.  He conducted experiments on psychics, and was apparently convinced by his results -- which he conveniently never shared.  As a celebrated innovator, he came to be known as The Wizard of Menlo Park, evidence of the extent to which Edison enjoyed wreathing his scientific invention in a kind of mysticism.  "The phonograph will turn that ancient dream of immortality into reality," he wrote of his own invention.  It's this kind of huckster phraseology that leads many** to suppose that his persistence on understanding the paranormal (and his alleged work on the necrophone) was a sort of hoax intended never to succeed, but rather to further embellish a lasting, supernatural self-image.

Meanwhile, Houdini was picking off mediums, psychics, telepaths, and performers of séances like money-grubbing flies.  He found them "morally repugnant", not the use of stage magic in itself, but that performers would use it as a way to exploit grieving clients desiring to communicate with lost loved ones.  His skills at sleight-of-hand and escapology were his weapons to reveal the tricks with which psychics and mediums built their trade.

"The singularity of Houdini's approach to magic was that he wanted to free his public from the belief in supernatural powers.  His escape philosophy was a way of performing a collective catharsis from the invisible powers of the State, physically represented by handcuffs." (Source)


So we find, paradoxically, the roles of scientist and magician inverted: A scientist who took advantage of the ignorance of the masses to enable his own superhuman persona, and a magician who used logic to publicly expose those intending to beguile.

I know who I vote for. 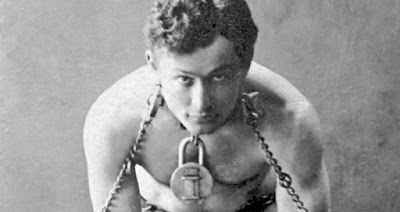 Also, he's just such a babe

* The letter correspondence in question was with Harry Houdini's close friend, none other than Arthur Conan Doyle -- the inventor of what is perhaps the universal symbol of logical reasoning and rationality, Sherlock Holmes.  Keeping with the theme of this post, I'll mention here the irony that Doyle was also himself a devoted spiritualist, which aggravated his friendship with Houdini and later led to their falling out.

** I among them
Labels: History