Tomorrow is the Turneringsdag 2017 for First Lego League, with an event scheduled in Tromsø. Details: http://hjernekraft.org/turnering/473/tromso/forsiden.aspx

However, this reminded me of the last time I flew into Tromsø. I had been on a flight from Oslo to Tromsø and, on landing, I was immediately whisked off to a Lego-building project.

The assignment for that evening was the construction of an airliner. Here is what the team put together. Not a half-bad effort if you ask me... 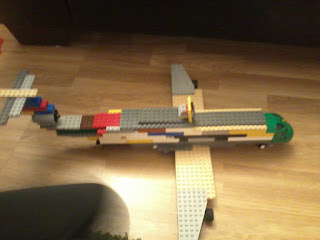 But some time later, I was going through my photographs and found a rather odd coincidence. Yes, I had taken that photograph of  the Lego aircraft. But the photo immediately prior to it was one taken out of the window of the aeroplane on my flight into Tromsø.

What I find rather disturbing is the condition of the wing, with streams of dirt and soot and missing paint. Seriously, click on the photo and take a look yourself! That aircraft has definitely seen better days. I do hope the ground crew take a careful look at it. 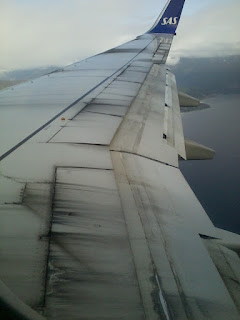 But the juxtaposition between the adjacent photos of the real aeroplane and the Lego model in the photo set was quite amusing.

And, yeah... the Lego one is way cooler.
Labels: aircraft Lego