In the Hawaiian language, the name 'Oumuamua roughly translates to "scout" or "messenger" from a distant path.  It is an apt name for the first detected interstellar object within our solar system.

The discovery was published November 20th, 2017 in Nature, with further observations presented in this paper, in part by UiT's own Jane Luu! 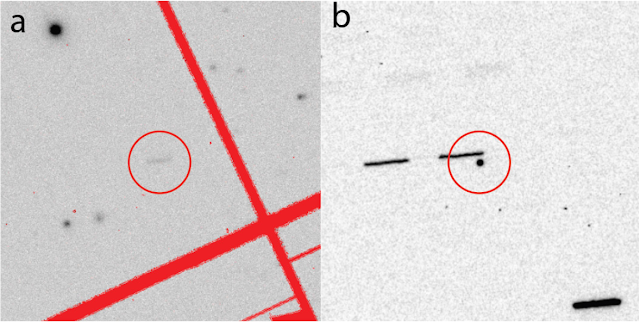 Figure from Nature (source).  (a) shows the presence of object 'Oumuamua, appearing as a streak of motion in relation to background stars.  In (b), observations were made tracking at the objects rate, and show no signs of a coma or "tail", indicating that the object is most likely rocky or metallic (like an asteroid) as opposed to cometlike.

Initial observation showed an object zipping rapidly relative to background stellar motion, traveling around 95,000 km/hr.  An international team of astronomers, led by Karen Meech, had to act fast: by the time 'Oumuamua was detected, it had already swung around its closest approach to the Sun and was on its way back out of our solar system.  Data from observations between October 14-30 were able to refine the model of orbital trajectory to a precision >100σ.  Unlike all other known asteroids and comets, this object could not possibly have originated from within our solar system, nor even from the comet-kingdom surrounding us known as the Kuiper belt.  Instead, 'Oumuamua was from far, far beyond in interstellar space.

Lightcurve and spectral analysis was able to tell us more about 'Oumuamua.  From the mean magnitude, a mean radius of around 100m was able to be deduced.  However, there was a very large 2.5-magnitude lightcurve range, indicating that 'Oumuamua is either two-toned (which spectral analysis disproved, concluding the object has uniform color over the entire surface) or very elongated, with rotational motion giving rise to the object reflecting in this irregular manner.  The rotational period is around 7 hours, not uncommon for an object of this size, and has an elongated axis ratio around 10:1.

So we have, as the astronomers put it, a "cigar" shaped asteroid, spinning rapidly and originating from beyond our solar system.  It could be possible to pinpoint the general region of origin, but further work is needed for this. (It's definitely NOT an alien spaceship)