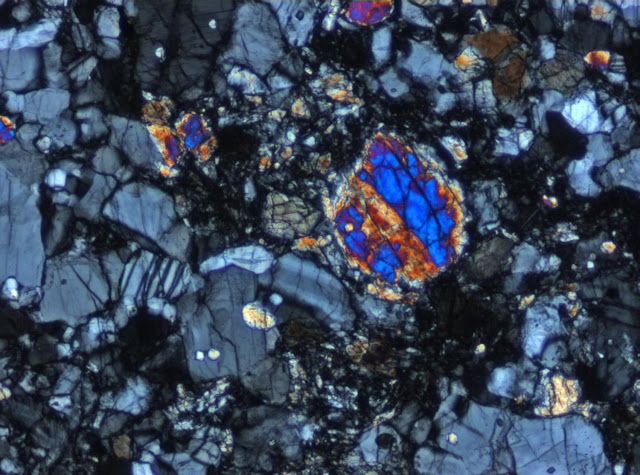 Cross-polarized light image of a portion of the lunar "Rusty" rock, with field of view ~ 0.07mm.
(Image credit: NASA)


Previously, I wrote a post about a new remote survey that confirmed the existence of an internal source of water on the Moon.

Within this survey was a reference to a piece of Moon rock brought back from the Apollo 16 mission, so-called "Rusty" because of the small rust deposits that led to speculation of more widespread water on the Moon.  Original analyses of Rusty showed the presence of important "volatiles"-- elements with a lower boiling point than most rock, and so which evaporate more easily.  Because of this analysis, the recent study was able to categorize large swathes of volatile-rich rock across the surface of the Moon as containing water.

However, quickly following the publication of this study, a team of geochemists from UCSD led by James Day conducted a reanalysis of the Rusty Moon fragment.  Their analysis shows a lower percentage of volatiles than originally thought, and Day cites this evidence as reason for skepticism on widespread water deposits. 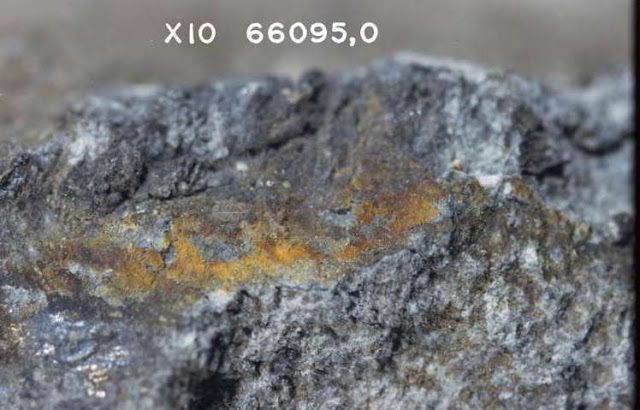 Closeup of a band of rust on "Rusty" lunar fragment.  (Image credit: NASA)


Though Day's findings do not explicitly contradict the presence of indigenous lunar water, it does potentially shed some light on the issue of lunar formation.  A scarcity of volatiles is consistent with a hot lunar origin (in which volatiles were mostly boiled off), such as an energetic impact event.

Personally, I still find the existence of indigenous water on the Moon convincing; the publication is very complete in discussing the deposits as uncorrelated with the presence of impact craters, and instead collected around volcanic vents that would feed directly from beneath the surface.

Conducting good science means being skeptical and finding creative ways to challenge new findings.  In this way, the geochemical analysis has been a quick and interesting contribution.  But as of right now, I'd say the evidence still supports the former.