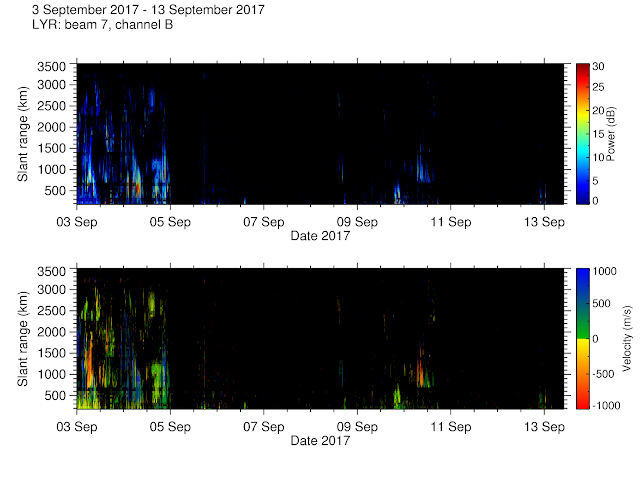 While KAIRA struts its stuff in response to the solar proton event currently underway, another radio instrument appears to have gone underground—the SuperDARN radar on Svalbard. This radar is part of the Super Dual Auroral Radar Network (SuperDARN), a global network of high frequency radars designed for studying plasma convection in the Earth's ionosphere. There's just one problem: the D-region ionosphere over Svalbard has been enhanced so much by this week's solar activity that the signals transmitted by the radar are being absorbed. As shown in the figure above, the radar stopped detecting backscatter just before midnight on September 5th, and only very small patches of backscatter have been detected since then. Without the backscatter, we cannot deduce any information about the ionospheric convection with this radar. This demonstrates that space weather can sometimes impact the very instruments designed to study it. Our team also learned an important lesson—check the space weather conditions before sending your engineer into the Arctic wilderness to fix a radar that isn't broken!

Of course it's not only scientific instruments that are affected by the enhanced D-region absorption. The D-region absorption may also severely impact on users of HF radio communications. HF radio communications are used extensively in the aviation and maritime industries, and also in military operations and by emergency services. During solar proton events, disruptions to HF communications in the polar regions may last for several days. It is therefore critical for HF communicators to have other methods for maintaining communications when the ionospheric conditions become unfavourable. For example, the Global Maritime Distress and Safety System (GMDSS) requires that sea vessels travelling in the polar regions have MF, HF and VHF radios onboard.
Labels: radar space weather