(Proto-)SciFi Through the Ages: Lucian of Samosata 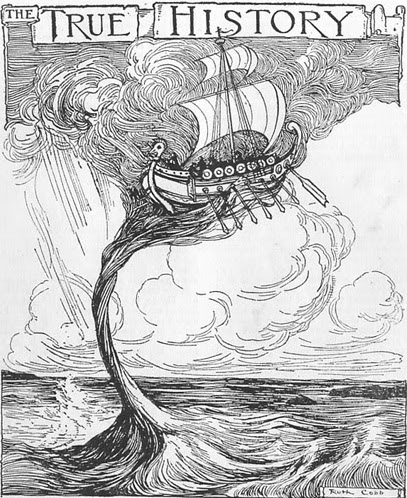 How do we define Science Fiction?  Popular trends in the genre might lead us to generalize SciFi as any story containing monsters and/or unknown "future" technology.  However, this definition creates something of a snafu in trying to pinpoint SciFi's provenance: are Medieval accounts of foreign monsters a kind of SciFi?  Is ancient mythology?  Can pantheons of gods be considered as an analog for human encounters with extraterrestrial life?

To all these questions, I would personally respond: Sure, why not?

There are a few examples from history that exhibit SciFi-like themes long before "science" was even a well-defined field of study.  For that reason, I think it prudent to include the term "proto-" SciFi in their definition, although their speculation and imagination is at times remarkably prescient.

Which brings me to the 2nd century, AD.

Lucian of Samosata was a satirist living in the eastern Roman empire (modern-day Turkey) in the mid-100s AD.  Known for his wit and ridicule of superstition, he was an admirer of the natural philosophers Democritus and Epicurus -- two proto-scientists if ever there were any.  His True History tells the tale of adventurers carried by a waterspout into the middle of a war for the rule of the planet Venus fought between the kingdoms of the Sun and Moon.

The full text of The True History is here, and it's completely and utterly bonkers.  I was quite surprised to find a book from antiquity that deals explicitly with interplanetary warfare and colonization, including human encounters with alien life-forms, mention of artificial atmospheres and liquid oxygen for survival in space, as well as the use of mirrors as reflecting telescopes (a technology that became reality only in the late 1600s), and creatures formed through human technology (and thus a kind of pre-robotics).

The story is undoubtedly satirical, a self-aware sendup of fantastical adventure stories (such as Homer's Odyssey).*  It is this self-awareness that makes the story so innovative -- instead of a mythological tale asserted as factual or symbolic, this is a deliberate work of fiction told for the sake of speculation.

Sure, it's no Frankenstein -- but it's certainly a step along the way.

* Essentially, it's as if The Hitchhiker's Guide to the Galaxy was written almost two millenia ago and in ancient Greek.
Labels: History scifi