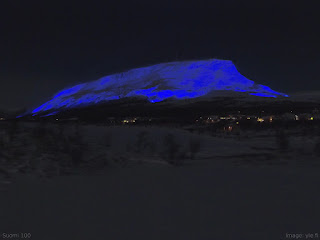 The largest illumination art in the world was created at Kilpisjärvi to celebrate the 100th anniversary of Finland. Tomorrow, 6th December 2017, Finland celebrates the centenary of the founding of its nation. All across the country, there will be celebrations, festivities and a plethora of other events to celebrate 100 years of history. 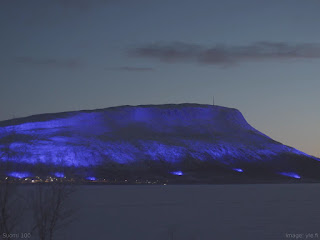 Part of the celebration includes the creation of artwork and, in the far northwest of the country the iconic mountain of Saana is being illuminated for the event. 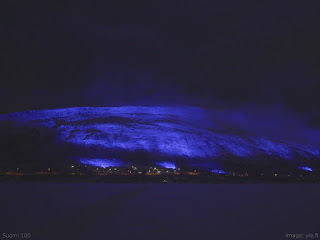 The entire mountain is being lit up in "Finnish blue". This is a massive scale, some 2,2 million square metres area. This makes it the largest illumination art work in the world. 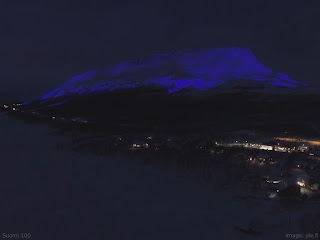 The light art is created by a whole team of artists and technicians led by Kari Kola. The opening display was at 16:00 on Monday 04-Dec-2017, and the illumination will continue throughout the celebrations for the Suomi100 - Finland100. The display is part of a series of exhibitions, under the title of Luminous Finland 100. 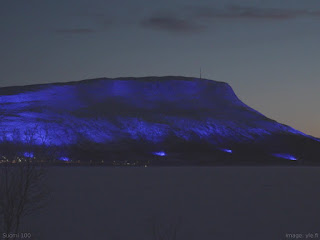 However, it is a challenging project, as December in Enontekiö is fraught with bad weather. As it turns out we had major snow storm in Tromsø last night and visibility is low. Saana is often wreathed in cloud. However, even if only briefly, the skies were clear enough to bath this epic Finnish landmark in light. 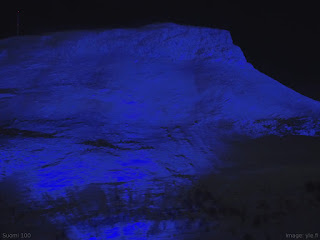 But as it is kaamos (the time of year when the sun doesn't rise), then the display can run throughout. There is no sunrise or sunset, although there is the pale blue of the midday twilight. 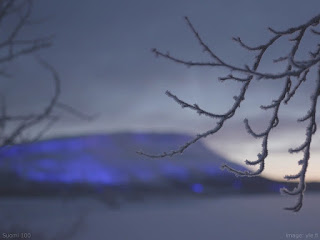