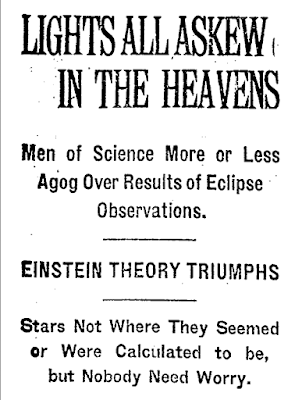 There are many good Science Discovery stories out there, but one of my favorites is about this article, reporting Sir Arthur Eddington's experimental verification of Relativity theory by observing distorted star positions during a solar eclipse in 1919.  (The full text of the New York Times article can be read here.)  What with the upcoming U.S. solar eclipse, it seemed relevant.

In a nutshell, Einstein proposed that the gravity from massive objects bends light around it.  We should be able to see this behavior from starlight as it passes the Sun on its way to our eyes; which is to say, their positions should be slightly shifted (only around 1-2 arcseconds) from normal.  Since we can't see [most] stars during the day, the ideal environment would be one where the Sun was present in the sky and yet it was effectively night -- during a solar eclipse.

It's an elegant experiment, and it produced the expected results, proving Einstein's theory. 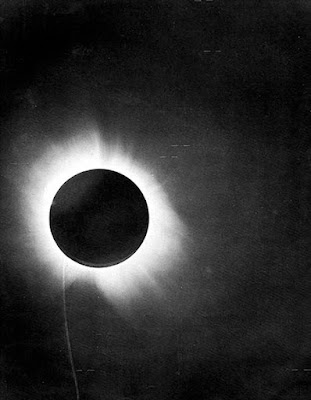 One of Eddington's photos of the 1919 eclipse


The New York Times sent their only available reporter, Henry Crouch, to London to cover this story -- but he happened to be a sports writer, in England reporting on golf.  Oops.

This article makes me laugh.  I love it.  The headline is priceless, and just about every line communicates the reporter's utter bewilderment at what was going on.  I think my favorite line has to be this one:

"Thompson states that the difference between theories of Newton and those of Einstein are infinitesimal in a popular sense, and as they are purely mathematical and can only be expressed in strictly scientific terms it is useless to endeavor to detail them for the man in the street."


Way to go, reporter.  "I'd tell you about this thing I'm writing about, but since it's useless trying to explain it to you plebs, I won't even try."

However, I do have to concede he kept it exciting.
Labels: Eclipse History