We've been doing a lot of testing of the HF radio receiver system over the past month. Not only do we have our home-grown system, but we also have a LOFAR low-band antenna module. The LOFAR system is that which was used for the construction of KAIRA. The front end for these antennas is a resin-filled "cap", which sits atop a 1,8m length of 400mm diameter PVC pipe. The cables plug in to that, providing DC power for the pre-amplifiers and sending the RF-signal out. These cables use F-type connectors and 75-ohm cable... this keeps things cheap, if you need to deploy thousands of them!

However, the USRP receivers that we use are 50-ohm systems, which have SMA connectors. Thus we need some small two-channel adapter boards, to act as impedance transformers and also to allow us to inject the DC power. Here is our prototype: 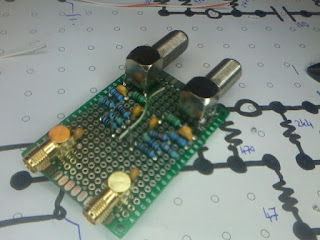 It is actually fun to build electronics. These days so much is just plug-and-pray, er... play. However, these little boards required real soldering! Also, without exact resister values, we had to come up with some interesting combinations. That reminds me of first-year physics, when you have to do calculations for parallel and series resistor networks. At the time, I thought "why not just buy the correct resistor value?"... well, sometimes you need something in a hurry. And you also happen to have thousands of 47- and 470-ohm resistors.