But there are some contenders, some stars that are unique or especially sparkly.  One thing to recall is that space is far from stationary -- stars are moving, exploding, being born, spinning and orbiting.  And sometimes we can even see it.

Animation made with a series of 55 infrared images from CHARA interferometer.  We can see the eclipsing binary system that forms Algol, with a dimmer star orbiting and passing in front of it.  Credit: Dr. Fabien Baron, Dept. of Astronomy, University of Michigan.)

Algol is a blue-white variable star in the constellation of Perseus.  In winter in the far north, Perseus is at zenith and almost constantly visible, wedged between Taurus the bull and Cassiopeia.  I will include some sky maps I rustled up from Stellarium below, for the eager stargazers among you.

Since we are lovers of nomenclature on this blog, the name Algol comes from the Arabic ra's al-ghul*, meaning "the head of the ghoul."  In the constellation, Algol represents the head of the gorgon Medusa, being carried in Perseus' hand.

As shown in the animation above, Algol is an eclipsing binary star system.  It is actually two stars, orbiting each other along a plane edge-on with our Earthly point of view.  As a result, the apparent brightness of Algol varies regularly.  Normally, Algol has a visual magnitude of 2.1, but every 2 days, 20 hours, and 49 minutes, the primary star is eclipsed by its dimmer companion and drops to visual magnitude 3.4 for the approximately 10 hour transit time.

A stargazer catching it at minimum will see that it is about the same brightness as it's neighboring visible star, Gorgonea Tertia.  Throughout the course of an evening, you can then witness Algol brighten to its normal intensity.

Even from early evening in Tromsø, Perseus is at a good altitude.  Algol is located behind the "s" in "Perseus" in these maps, and encircled in red with information listed on the left, on the bottom image. 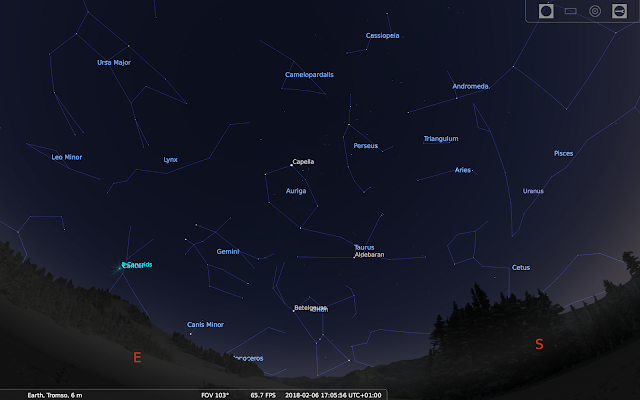 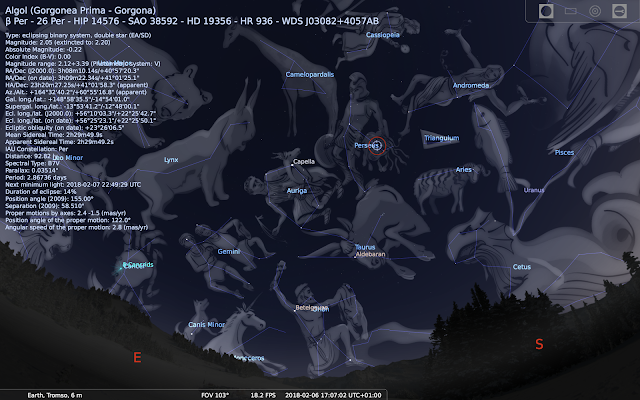