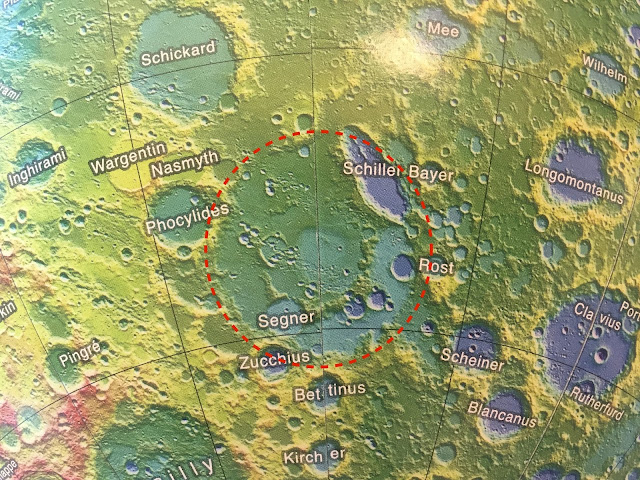 Naming conventions within the astronomical sphere can be an entertaining study.  An early story about the appeal to "rules" of nomenclature is during the discovery of a new planet by William Herschel in 1781.  It was his brilliant notion that the newfound planet should be named in honor of the non compos mentis sovreign King George III of England*, but thankfully, the Royal Society intervened.  It was their belief that the convention of naming planets after Greek deities should be maintained, and so Uranus joined the planetary pantheon.

Nomenclature for sub-groups within our solar system also exist: the moons of Uranus are named after Shakespearean characters, and my favorite, the planet Venus, has geologic features categorized by Goddesses, mythological heroines, and women from history.

The Moon is a bit less thematic.  The large basaltic basins, or "seas", are all given Latin names describing either weather or abstract concepts.  Mountain ranges take their names from terrestrial mountain ranges**, and craters are generally named for deceased scientists, philosophers, or explorers.  "Features that don't fall into any of the above categories are named after nearby craters," Wikipedia tells us, unhelpfully.

Those of us mapping radar data of the lunar surface are quite interested in a region, shown above, which is the site of a cryptomare, or subsurface dark region.  The concentric rings within the circled region looked very much like an old, weathered impact crater -- possibly one that filled with early volcanic basalt like other mare, and then was covered up with lighter ejecta material from ensuing impacts around it.

No lunar map could give a name for this region, and only references to a vague "Schiller-Schickard region" in scientific papers.  We decided to write to the necessary authorities and propose some names, only to find that this region is not categoried as an impact crater, but a "basin", and so merely given an unofficial name based on surrounding craters.  We were informed that this basin is unofficially called the "Schiller-Zucchius basin," a let-down if ever there was one.

We learned firsthand that the land of Astronomical Nomenclature is one ringed with several layers of security.  But I suppose, to keep myself from being too crestfallen, I can just recall the planet George.

** So be sure to specify next time when telling coworkers that you'll be vacationing in the Alps.
Labels: Moon Space