Let's All Move to TRAPPIST-1

From NASA's Visions of the Future poster collection, all available here.


Some of the most exciting astronomy news to come out of 2017 was the discovery of the TRAPPIST-1 exoplanetary system, an ultracool red dwarf star with not one, but SEVEN roughly Earth-sized planets detected within its orbit.  Three of those planets are within the "Goldilocks Zone", orbiting at a distance which would allow liquid water to exist on their surface.

On February 5, 2018, the results of two new studies using the Hubble telescope were announced, together suggesting that the TRAPPIST-1 planets are all terrestrial (rocky planets), and that they are rich in volatile materials -- probably including water.

Observations were made using Hubble Space Telescope and published in Nature Astronomy.  "Our results demonstrate Hubble’s ability to study the atmospheres of Earth-sized planets," comments co-author Hannah Wakeford.  "But the telescope is really working at the limit of what it can do."*

A second theoretical study based on observations from both ground-based and space telescopes (namely Kepler, Spitzer, and SPECULOOS in Paranal) is due to be published in Astronomy & Astrophysics.  This study modeled refraction of the light shown in transit events in order to pinpoint the densities of each TRAPPIST-1 exoplanet, and estimate the composition based on those densities.  The study suggests that some of the TRAPPIST-1 planets could have up to 5% of their total density from water.  For comparison, this is around 250 times the amount contained on Earth, which contains around 0.02% water making up its mass.

So I don't know about you, but I'm gonna go start packing... 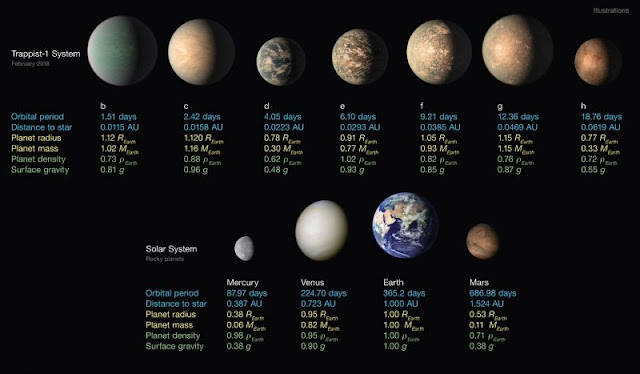