In the main building at the Cloud District, there is a photograph on the wall, where I often see people stopped and staring. The photograph is off a mountain, on which there is a shadow of a mountain. It looks fake... a trick played using photo-manipulation software? Well, no.

This is a real effect, which is common in the fjords. The mountains on one side cast a shadow directly onto the other side. When the fjord is narrow, and the mountains are steep and tall, then the shadow can be quite sharp and dramatic.

On a recent trip to Skibotn, I managed to see the shadowed mountain in question. 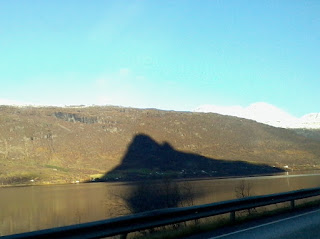