My friends at the Institute of Atmospheric Physics (IAP) in Kühlungsborn are in the progress of a ten day multi-static meteor radar campaign. This is the first large scale deployment of the MIMO spread spectrum meteor radar network they have developed. This experiment will yield the largest daily meteor trail echo count over a geographic area ever recorded -- allowing mesospheric winds to be studied at higher resolution than before.


This campaign is the culmination of a lot of work that has gone into: multi-static meteor radar networks, radar signal processing techniques for pseudorandom coded continuous wave radar transmissions, use of multiple transitters and multiple receivers for radar interferometry. Several master's and bachelor's thesis works have also contributed to this effort in an essential way: Nico Pfeffer, Matthias Clahsen, and Sven Geese.

Ultimately, the scientific output will be a high resolution mesospheric neutral wind field characterization within a large geographic area (~500 x 500 km), using a technique pioneered by Gunter Stober and Jorge Chau. The meteor trail echo count for this experiment will be 2-4 times higher than with the previous experiments, approximately 200000 meteors trail echoes per day. The data can also be used to invert the structure function of the wind field, which is current work in progress.

The idea behind MIMO radar is that there is one interferometric transmitter (about 150 meters in diameter), which consists of five antennas. Each transmit antenna uses a different pseudorandom transmit waveform. These transmissions can then be picked up by a single receiver antenna, which decodes all five transmit sequences. After this step, it is possible to perform interferometric angle of arrival (or actually angle of illumination) of the target, just by using a single receive antenna.

In the first test of the MIMO radar last summer, we observed 30000 meteors in one day, by using five transmit antennas in Kühlungsborn, Germany, and a five antenna receiver array in Neustrelitz, located about 100 km south of Kühlungsborn. This is a very good number of detections for a meteor radar system. Due to the multiple antennas on transmit and multiple antennas on receive, it is possible to actually synthesize an interferometer with 25 virtual baselines -- one for each combination of a transmit antenna and receiver antenna.

If this campaign works out as expected, this could pave the way for future meteor radar networks with universities, schools, and citizen scientists hosting receiver antennas, which listen to echoes illuminated by a centralized interferometric transmitter. As indicated by Chau et.al., in terms of cost and logistical complexity, it would be very small effort to build a large scale meteor radar network in this manner. A school would only need to find place for a single Yagi antenna, and a single PC connected to the internet, in order to participate in the network. With this hardware, each new station would provide an additional 10000 to 30000 new meteors detections per day for the network! Due to the relatively small infrastructure required for setting up this network, it is expected that this type of a network could also be setup for other focused mesospheric measurement campaigns in the future.

The campaign includes 12 different transmit-receive paths, which are in the geographic area around Kühlungsborn:

The MIMO (Multiple Input Multiple Output) link stations consist of multiple interferometric receivers, which are used to listen in on the five antenna transmitter in Kühlungsborn. There is one such receiver in Neustrelitz, and another one in Bornim.

The MISO (Multiple Input Single Output) links stations are temporary links, established by installing a single antenna to listen in on the five transmit antennas in Kühlungsborn.

The SIMO links are traditional pulsed meteor radars, located in Juliusruh and Colm, The pulsed radars are also received with bi-static receiver stations in Neustrelitz and Bornim.

The campaign is in full swing, and based on the reports, it looks like people are having fun. If I wasn't teaching, I'd probably be out there helping out with this campaign. Here is what some of the receiver stations look like:


Each station needs to be in sync with the global time reference. This is nowadays easy with GPS. Here's a GPS antenna for one of the temporary receive sites:

This is what the receiver station hardware looks like for a MISO link; a simple one channel system: 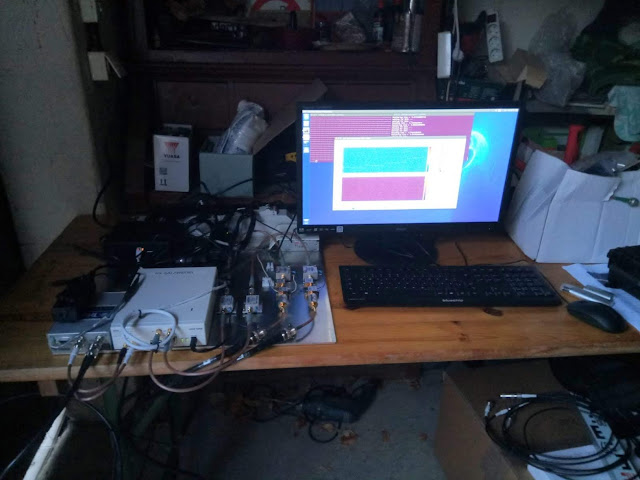 Reports from stations get communicated over an interactive chat. Here's a 24 hour plot of sky noise, indicating "alles klar", we can see the galactic synchrotron emission daily variations:

Here's an example realtime plot of meteor trail echoes being detected in Mechlendorf, merely a few kilometers from the transmitter site.
Here is a plot from Neustrelitz showing lots of meteor detections, and a nice sky noise variation (with a little bit of RFI): 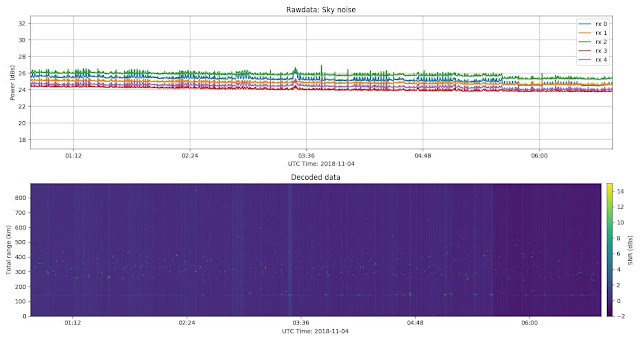