Oblique ionograms between Sodankylä and Longyearbyen

As we don't yet have a license for the HF radar in Longyearbyen, I've setup the antenna to receive transmissions from the Sodankylä Geophysical Observatory ionosonde, which is about 1250 km away from Longyearbyen. The SGO ionosonde is a fairly straightforward FMCW system, which sweeps between 0.5 and 16 MHz with approximately a 500 kHz/s chirp rate. 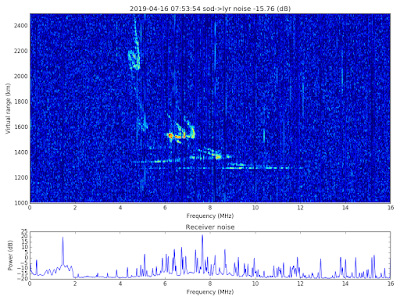 While installing the GNU Chirp Sounder, I made some updates to the software. It still compiles with relative ease with GNURadio 3.7, which was a huge relief. Just make sure you have cmake, swig, and all the relevant libraries installed. The new release can be downloaded here: gr-juha-1.25.tar.gz