The team processing the data (Matthias Clahsen, Nico Pfeffer, and Miguel Urco) is nearly done with the data for the full SIMONe campaign. I just got the first batch of data, which contains the first 24 hours.

The data looks really good. There are about 100000 meteors per day. I have derived a mean horizontal wind, which is a 2d wind velocity vector in North-South and East-West direction. Each meteor provides us with a one dimensional projection of the instantaneous wind, and when you combine Doppler shifts of lots of meteor trail echoes together, you can estimate the full wind velocity. The vertical direction is a bit trickier -- on average it is very close to zero, and there is large horizontal and temporal variability in the vertical wind. It is customary to not estimate the vertical wind due to this reason.

In addition to the mean wind, I have also estimated meridional and zonal slopes of wind -- i.e., how much the wind velocity changes over the field of view of the radar. This is a small correction, but yields interesting information about e.g., horizontal divergence.

The first plot shows the mean wind and estimation errors. The speed is in m/s. 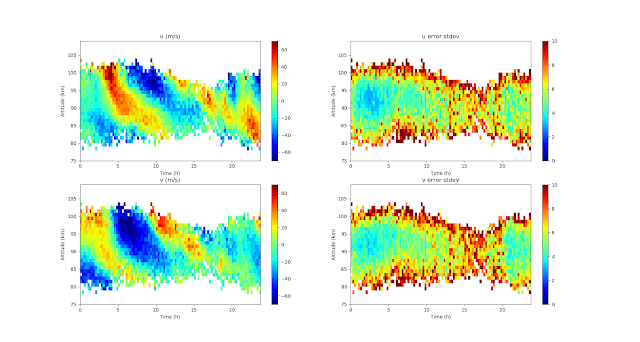 The second plot shows the first derivatives in the east-west and north-south direction: dv_x/dx, dv_y/dy, dv_x/dy and dv_y/dx. These are in units of m/s/degree latitude or longitude. One can clearly see that there is a meridional and zonal slope to the mean wind! 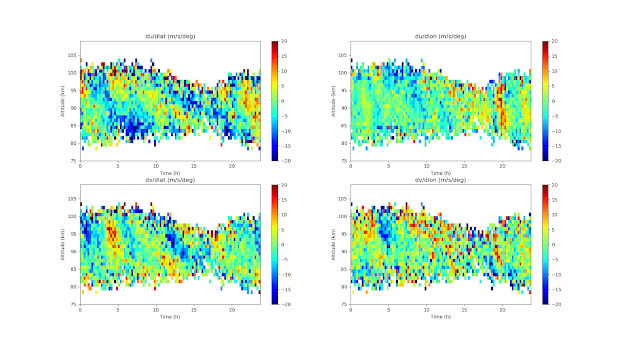